One thing that many overclockers wish they could do is change clock frequency while a benching session is in progress.  For instance when you are running 3DMark06 overall CPU power helps get a good 3D score but may be too much for your cooling method when you reach the CPU benchmark.  In those instances you can fire up ROG Connect and remotely downclock the CPU for that part of the benchmark and clock it back up again later.  Here is what you would see on a remote PC. 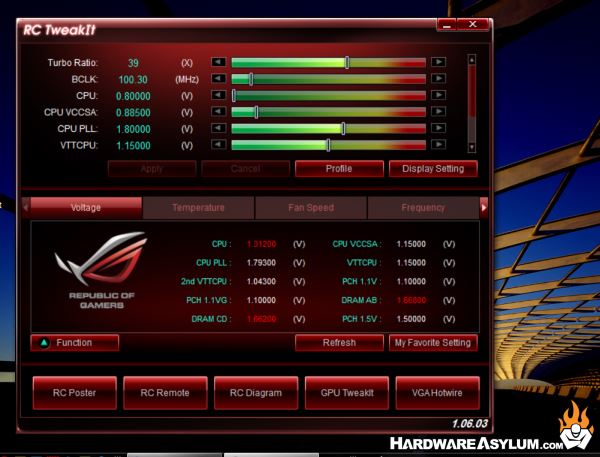 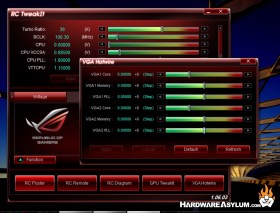 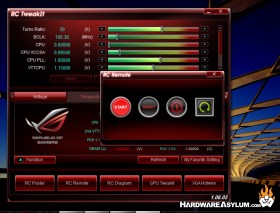 ROG Connect also does wonders for non-overclockers who would like a remove view into what their PC is doing so while ROG Connect does allow you to tweak most everything it also allows you to see when turbo kicks in, current system temperatures and what the current CPU voltage is.
Ai Suite II and TurboV Evo
Most motherboards come with some sort of tuning and monitoring package to help the hardware enthusiast get the most from their system.  The Asus Ai Suite II is more than just a single overclocking program but encompasses an entire suite of programs to control most everything on the motherboard such as Bluetooth, overclocking and even power delivery.  As you can expect these are split across multiple software packages so you can choose which one you want to install.

Below are some screenshots from the Ai Suite II. 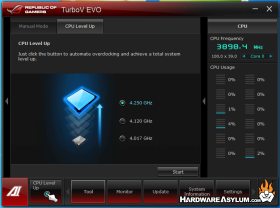 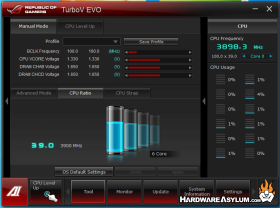 Keep in mind that everything you can control with the Ai Suite II is also available thru the system UEFI.  So, if you're like me and would rather do your tweaks before the OS loads you can do that.  Otherwise you can fire up the Ai Suite II after Windows loads and do your tuning in real time before committing the changes.
Motherboards