Much like with the Maximus IX Apex the Rampage VI Apex is following a black on black color scheme with some accent grey features on many of the expansion slots.  Both heatsinks and I/O cover feature a brushed metal texture with a slightly red finish.  I would consider this a throwback to the original black and red color scheme found on some classic ROG boards from days gone by.

One of the most striking features of the ASUS Apex is the shape of the motherboard.  According to the specifications the board has a X-Shaped PCB and if you extend the lines it may very could be.  However looking at the board from a macro level there are some very ornate cuts made that play into the onboard features surprisingly well. 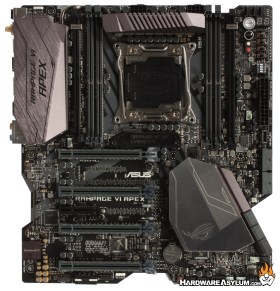 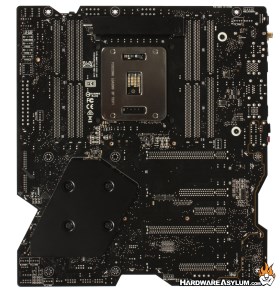 Flipping the motherboard can tell us a lot about how it is constructed including where some of the major chips are located.  Once again there is a good amount of activity on the back of the Rampage VI Apex.  In addition to the multitude of wave solder connections you’ll find two very large heatspreaders along with a good number of surface components.

The VRM on the VI Apex is an eight phase design.  While this might seem small it is constructed using RowelRstage ICs that are known to be highly efficient and able to deliver considerably more power with less heat.  Given the 140w TDP of X-Series processors the more efficient you can make the VRM the better. 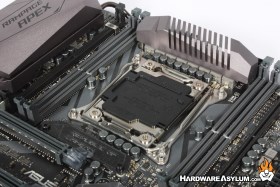 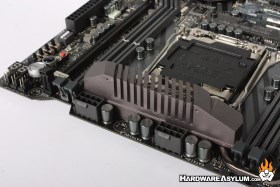 LN2 overclocking places a huge demand on system components from the PSU supplying power to the motherboard, memory and even chipset have to deal with the additional strain.  Of course the highest demand is on the processor and to ensure there is enough current to run an 18-core CPU you’ll find two 8-pin CPU power connectors behind the VRM.