Earlier this year I got the opportunity to review the Maximus IX Apex and recognized it as one of the premiere motherboards when it comes to overclocking with Kaby Lake.  Not only did the motherboard support some of the fastest DDR RAM you could buy but offered excellent RGB lighting, a custom cut motherboard and personalization options making the board excellent for both extreme overclocking and mainstream use.

In this review I’ll be looking at a new version of the Apex that is not only designed for overclocking but also raw, in your face, performance.  The ASUS ROG Rampage Vi Apex comes from a long line of overclocking motherboards that symbolize the epitome of what a high-end motherboard should be.  Of course, these days, the lines between high-end, gaming, overclocking and mainstream all tend to blur.  For instance you can game on any motherboard and high-end hardware can apply to both gaming and overclocking.  However, there is one major difference that makes an overclocking motherboard stand out.  Lots and Lots of onboard controls, voltage test points, disable switches and even thermal probes.  These are the things overclockers use during a bench session and just make the whole process much more enjoyable. 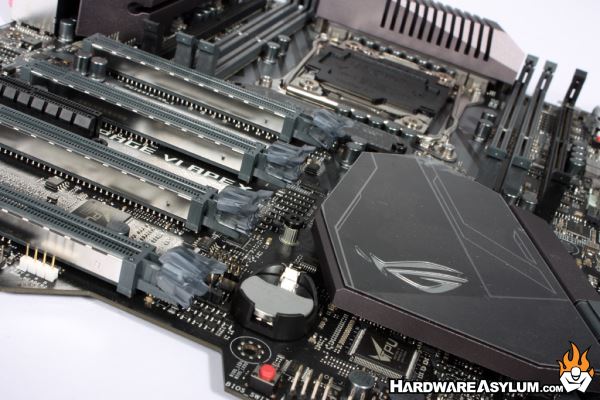 The ROG Rampage VI Apex is a very unique motherboard both in its dedication to overclocking and overall design.  You will find that many common items have been moved from their traditional location while others have been added like a dedicated fan header for AIO pumps and plenty of hardware switches used for different types of overclocking situations.

In fact, that is one thing that has always impressed me with ASUS hardware.  There is an actual attempt to pack every motherboard with more features than normally get with the competition and they actually work properly.  Some good examples would be PWM fan headers, RGB lighting software that works and is compatable with other components, Memory compatibility and some rather impressive tools for overclocking including remote control software.