As with all of our reviews, we pit the default speed system against the overclocked one in a head-to-head byte match.  The effective overclock for these tests is 5.1Ghz @ 51x multiplier.  Now if this value made you do a double take, then your finger is on the pulse.  5.1Ghz is below the max turbo frequency for the Core i7 12700K and to be honest I am a little concerned.

In addition to the “ample” CPU overclock I set the XMP profile on the memory and bumped the memory frequency up to 5400Mhz.  The XMP clock for these Crucial modules is 4800Mhz and is the same as JEDEC so, I pushed the clock slightly.

It should be noted that during my benchmarking session the default speed for the CPU was 4900Mhz, it never once went over 5Ghz and would occasionally drop to 4.8Ghz.  It would seem that Intel has refined the turbo boost feature to better control heat and performance.  My overclock of 200Mhz only slightly increased performance while the actual memory overclock did the heavy lifting. 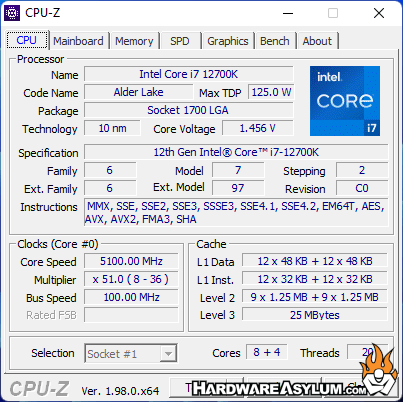 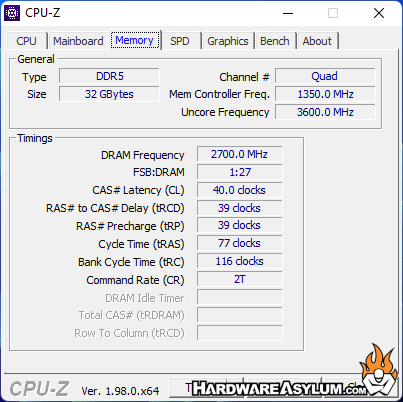 To maximize system performance, you have a couple options.  The first is straight multiplier overclocking after that you can extract a little more by tuning the BCLK and memory settings.  This will increase overall memory bandwidth and make things faster due to how the multipliers work.  Of course, with memory you can “buy” performance by simply buying faster modules and in doing so you not only get faster out of box performance but considerably more headroom if you choose to experiment with BLCK overclocking and tuning the memory controller.

With modern CPUs heat is a major concern and when combined with “Factory Overclocking” using boost you need to ensure that your CPU is kept cool to get maximum performance.  I was using a high quality AIO cooler on this system and under most benchmarks I was being throttled to 4.9Ghz and wasn’t able to hit 5.2Ghz without going over temperature.  So, much like with Comet Lake we are seeing a MAJOR limitation to CPU overclocking which has pushed enthusiasts to start pushing memory.

Personally, I have found memory overclocking to be boring it never did much on older CPUs but, seems to do quite the opposite on Alder Lake.  Maybe it is simply a product of the overall limitations of the platform where any performance boost is amplified because the normal gains are no longer realized.