The keyboard is your standard scissor switch chicklet design with a full key layout and included 10=key along the right.  Cyberpower PC tells us that they keyboard is an anti-ghosting design with 10 key rollover allowing you to press 10 keys at once and have them all register. 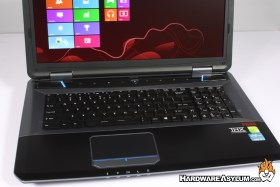 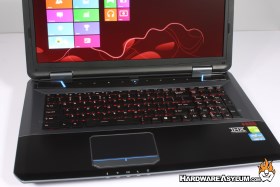 Of course no gaming system would be complete without lighting effects and the Fangbook features a series of blue LED lights around the top stereo speakers and backlighting under the touchpad that highlight the mouse buttons.  You'll also find accent lighting under the front edge giving you a partical underglow effect.

Keyboard lighting is controlled by a zero pressure switch located in the top bar.  Enabling this will backlight the entire keyboard with a red glow which happens to be enough light to know where your fingers are but not enough to be distracting even in the darkest parts of your game. 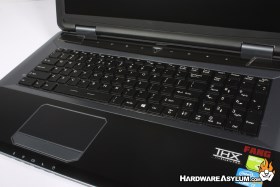 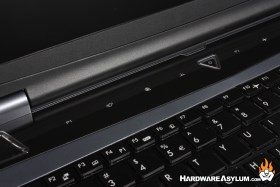 We mentioned the top button bar.  There are a total of eight zero pressure buttons and a centrally located power button.  P1 and P2 are programmable while the other have default functions including media access, fan speed, keyboard lighting, airplane mode, screen blank and optical drive eject.  The power button is backlit and requires an actual press to operate.

The touchpad is very large measuring in at 4" x 2" with 2x half inch tall mouse buttons.  The touchpad is located at the surface of the wrist rest.  While this does make it easily accessible it also facilitates accidental touches in the heat of battle.  Lucky for us Function + F3 will disable the touch pad but doesn't turn off the blue accent light. 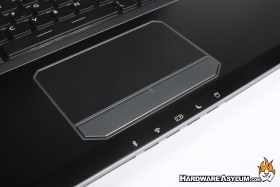 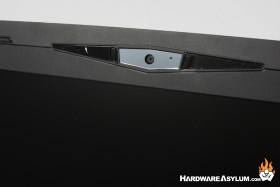 No notebook computer would be complete without a web cam and while the fixed position 720p camera may seem under powered it does work well for video conferencing and streaming over twitch.
Systems