There are a number of reasons look for a custom video card over a reference version and for hardware enthusiasts the most important is overclocking and performance.  Reference video cards are designed to handle factory expected workloads and thus are designed to be relatively inexpensive.  Once you start overclocking you add additional stress to these components creating excess heat and could induce rapid failure however, more often than not, simply limited your overclocking potential.  It all depends on your particular environment.

The Aorus Radeon RX 570 is a factory overclocked video card with additional software based overclocking profiles that raise the core clock a mere 15Mhz.  In the big picture that really does nothing for game performance but is an available and supported overclock.

I think this card can do better.  During the overclocking adventure I was able to pull a very respectable 1400Mhz Core and 2100Mhz (630Mhz) Memory overclock proving that this chip on this card does have some headroom for overclocking.

As with all of our reviews the overclocking tests show the default score against the overclocked one giving you an idea as to what kind of gains you can expect. 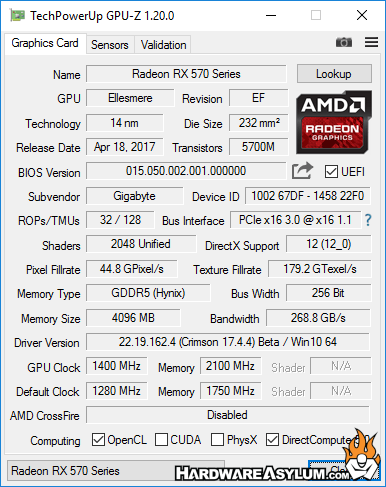 Overclocking is something most enthusiasts like to do and while I was able to get an extra 120Mhz out of the RX 570 there was only a minor increase in game performance based on the Hitman 2016 scores.  I suspect some of the disappointment comes from the lack of framebuffer memory which can cause everything to slow down while waiting for data to be processed.

You can see the effect of this when comparing the performance difference between Firestrike Extreme vs Firestrike Ultra.  Ultra gains are considerably less while Extreme and even Timespy enjoy a much larger performance boost.