There are four screws holding the Twin Frozr IV in place making it exceptionally easy to remove.  Under the cooler you can clearly see the component layout and heat spreader assembly. 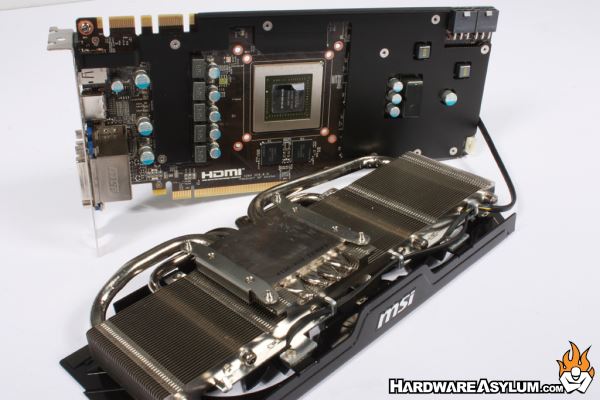 The Twin Frozr has become a common cooling solution on all of the high-end MSI video cards and is often regarded as the best factory cooler on the market today.  Twin Frozr IV is a fourth generation cooling design that features two specially designed cooling fans over a massive heatpipe array.  The fans are designed to deliver 20% more cooling performance and are 17dB quieter than the stock NVidia cooler. 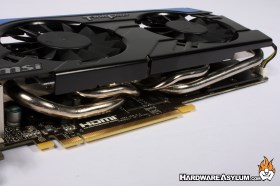 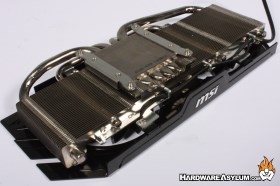 Excess dust can plague a smooth running system and short of pulling the cards and blowing them out there is very little you can do to prevent this.  The Twin Frozr IV features Dust Removal technology that addresses dust accumulation by spinning the two 80mm fans in reverse for 30 seconds during the boot up process.  This helps to clean the heatsink by pulling air thru the cooler and ensures good airflow over a longer period of time.

One of the limiting factors related to GPU overclocking is power delivery and the size of the video card PWM.  Lighting edition video cards take this concept to the extreme and often require taller PCBs to accommodate the multitude of power phases, often in excess of 17.  The MSI N660Ti Power Edition OC features a conservative 5+2 phase PWM that not only enables triple overvoltage control but can also enhance the overclockability of this card and without board modifications. 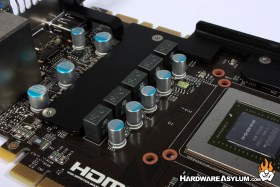 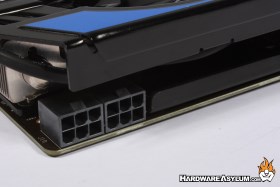 Dual 6pin PCI Express power connections are required to run the GTX 660Ti and for once if you forget to hook them up you'll get a pleasant warning message instructing you that the card is operating in low power mode and that you should connect the power leads before continuing.
Video