Zalman is a well known company in the cooling world and has created some really good coolers.  Here we have an orb style cooler with triple fans, two on the outside and one in the middle.

Aside from some custom designs this I believe is the first triple fan cooler in the retail market.  The cooler is a core contact design so overclocking may be limited but thermal transfer should go well with Sandy Bridge and the new 2011 socket. 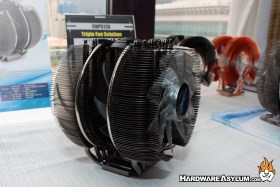 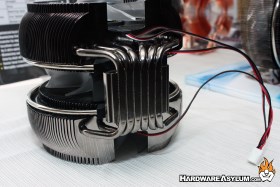 There were a couple of case on display including this one with a flip down fan door so you can access the drive trays. 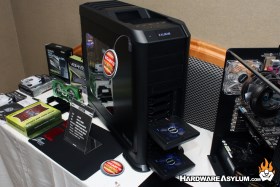 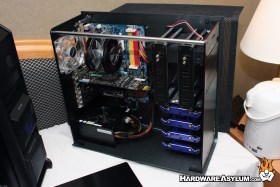 A new prototype case was on display that can best be described by putting two "L"'s together.

The case is made from solid aluminum with the main cover being perforated for fanless cooling.   Zalman had the case was on display to get feedback from media and visitors but given what they have here I think the natural genesis will be the best approach.

Otherwise you'll have 6 fans hanging off the side, doors, and hot swap bays, none of which will be pretty.
Events