The FTW is following the familiar EVGA color scheme of Black on Black with a new I/O cover design and color borrowed from the Z370.  The new cover is an anodized part and is used to hide the ugly I/O connections and tie the two VRM heatsinks together, at least visually.  Each heatsink is a proper cooling block and used to cool one set of mosfets.  I say proper because these are no longer large ornate blocks of metal but instead real heatsinks designed to dissipate heat. 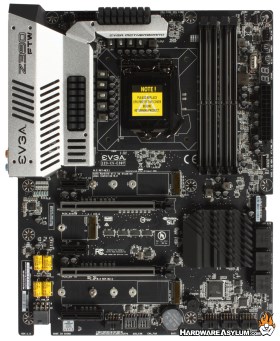 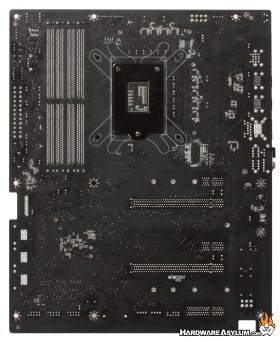 Flipping the motherboard can tell us a lot about how it is constructed including where some of the major chips are located.  As with most EVGA motherboards every PCI Express slot is fully wired meaning that the full slot width is soldered to the PCB.  That doesn't always mean each slot comes with full set of PCI Express bandwidth.

EVGA has included a very interesting VRM that looks to be 10 phases (11 from the EVGA documentation) with two chokes being a different capacity.  In terms of overall size of the VRM is rather small for an LGA 1151 motherboard, or at least compared to the ones I normally review.

The area around the CPU socket is very well organized with very few components making it perfect for those who experiment with alternative cooling methods.  Depending on your cooling choices the smaller VRM might actually look better especially considering that most of the dark parts will be obscured. 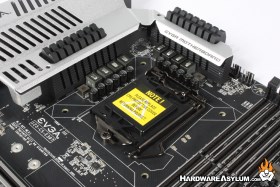 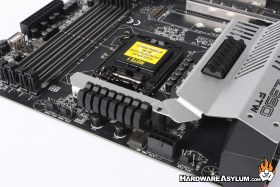 Behind the VRM cooler you'll find the CPU Power connections comprised of a single 8-pin power connector.  Access to the connector is good however; removing the cable is difficult since the I/O cover doesn’t allow any fingers to get to the other side of the plug.  I have always tested motherboards on an open bench so everything is easily accessible and even with all that room the wire was still difficult to remove.