The current trend with motherboards is to hide the fact that there is an expertly designed and well thought out PCB under the covers.  However, on the positive the new coverings give companies more opportunities to increase their branding real estate.

As you can see the XII Hero is almost fully covered with an extremely large I/O cover to the left and three extremely large VRM coolers surrounding the CPU socket.  Below that you’ll find the heatsink cover for the Z490 Chipset along with three removable heatsinks for M.2 drives. 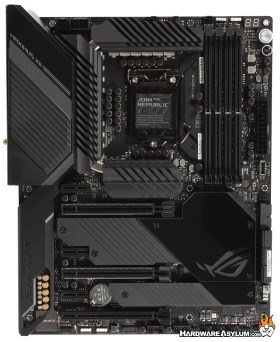 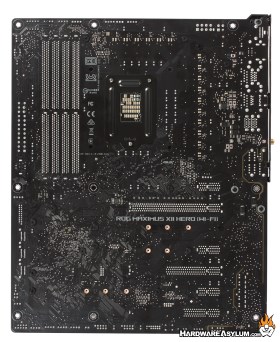 Looking at the back of the motherboard we can get an indication as to how the board is constructed, most notability, how the PCI Express slots are wired and locatoin of M.2 drives.  From this we can usually determine which slots are primary and secondary in terms of bandwidth and better understand optimal performance.

You will notice there is no backplate on the Maximus XII Hero leaving the back of the PCB naked and exposed.

Looking around the CPU socket you will find what appears to be a 16 phase power supply based on the number of chokes around the CPU socket.  According to the documentation this is a 14+2 phase VRM encased in an extremely large heatpipe connected heatsink.  This VRM design is based on a teamed architecture that removes the doubler for cleaner power.  The controller is ASP1405I supporting 60A VCC MOSFETS on this board. 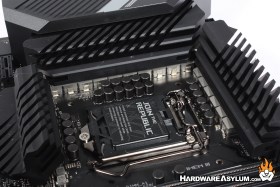 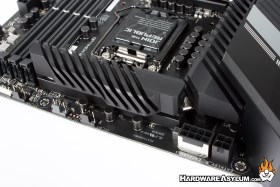 Behind the VRM cooler you'll find the CPU Power connections comprised of a single 8-pin and single 4 pin power connector.  Access to the connector is good allowing power cables to be installed and removed with ease.  I especially like the metal encasement for extra strength.

If you look carefully across the top near the VRM cooler you’ll find fan headers for a AIO pump and CPU fan nearby.