The AMD R9 Fury was released in June of last year (2015) under a veil of controversy.  Some large review sites were not given a review sample for launch which sparked questions about the AMD position and message they were trying to convey.  As many of us know the new Fury chips aren't the fastest on the market but brought with them the first ever High-Bandwidth Memory (HBM) implementation and was designed to take advantage of VR and DirectX 12.

The R9 Fury has been out for awhile and In this review we will be looking at one of the custom implementations the Sapphire Nitro Radeon R9 Fury.  As the name suggests this is a R9 Fury video card using the Sapphire Nitro cooler and Sapphire original PCB design.  The design goal of the Sapphire Nitro Fury is to be a cool, quiet and overclockable video card for gamers and hardware enthusiasts who want the best Fury card available. 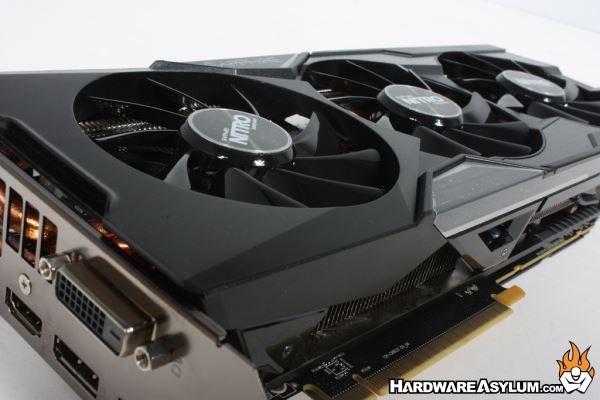 R9 Fury is a Fiji based GPU with the famous AMD HBM memory design.  HBM or High Bandwidth Memory places the memory chips that are normally positioned around the GPU directly on the GPU die.  This lowers latency and can deliver 3x the bandwidth per watt over traditional GDDR5.  Most of the speed comes from the 4096-bit memory interface with a total of 512GB/s of total memory bandwidth.

At launch the new Fiji GPU was split into two parts.  The Fury, like the one featured in this review, and the flagship the Fury X.  In keeping with normal AMD graphics implementations the two GPUs are identical silicon but with something disabled.  For instance the Fury X comes with a core clock of 1050Mhz and a total of 4096 processing cores.  The Fury features the same silicon but has a large portion of the GPU disabled using only 3584 processing cores and a core clock of only 1000Mhz.

Our Sapphire card comes with a factory overclock of 1050Mhz matching the Fury X but is still running with fewer processing cores.