Typically when I go to remove a video card heatsink there are four to six screws holding the cooler in place.  With the Nitro Fury there were 19!  It would seem that the screws holding the back plate on are shouldered and pass directly through to the Tri-X cooler.

While you have to remove 19 screws to remove the heatsink only 11 are connected to the backplate.  Removing this exposes a single heat connection and thermal pad right above the Sapphire VRM. 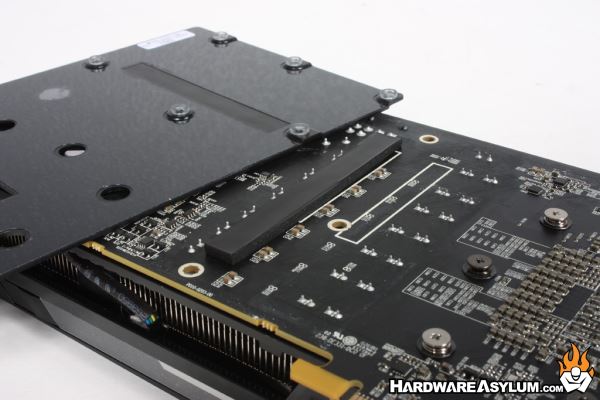 The corresponding area on the backplate is also exposed while the rest of the aluminum is protected with plastic insulation.

Sapphire is no stranger to large video card heatsinks and the Nitro cooler is no exception.  Under the fan shroud you will find four large diameter heatpipes that snake across each other near the cold plate.  They all terminate on the long side of the heatsink but loop back on the short side. 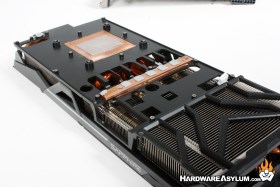 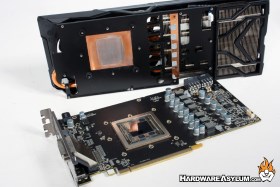 Interestingly enough the aluminum baseplate covers most of the heatpipe interaction leaving a subtle copper glow underneath.

As mentioned before the Sapphire Nitro Radeon R9 Fury is a very compact video card.  At the center you will see the large Fury GPU with integrated HBM memory modules.    The area directly around the GPU is completely clear as it would normally be reserved for GDDR5 memory chips. 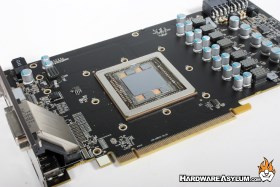 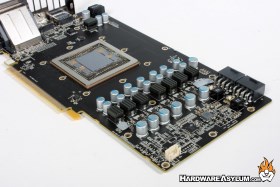 You may also notice the finned chokes as part of the VRM.  These are a trademark item you get when Sapphire does an original board design.  They may not provide any real cooling but look cool.

The VRM contains 7 power phases in what appears to be a split 4+3 design.  Or could just be a random place for a screw hole.  All 7 power mosfets are directly connected to the heatsink and yet are separated from the main GPU cooler.  The heat is instead absorbed by the aluminum baseplate and also transferred to the aluminum backplate.