There are a number of reasons to hold out for a custom designed video card over a reference version and for us the most important is overclocking and performance.  Reference video cards are designed to handle factory expected workloads and thus are designed to be relatively inexpensive.  Once you start overclocking you add additional stress to these components creating excess heat and could induce rapid failure.  Or, they could be just fine.  It all depends on your particular environment.

With a custom designed card the engineers will often reinforce the notable weak points and make some tweaks to increase performance.  The Sapphire Nitro Radeon R9 Fury features a custom PCB designed by Sapphire that stretches the card giving more room around the GPU and adds a single power phase to the custom VRM.  This is likely for the memory controller but is difficult to tell.

The card is then given a factory overclock and Nitro Tri-X cooling solution to create the card used in this review.

During the overclocking adventure we used the Sapphire Trixx software and started increasing the core and memory speeds until artifacts appeared on screen or Firestrike Extreme crashed.  To our surprise the card ran a solid 1179Mhz Core and 1260Mhz (630Mhz) Memory.

An interesting observation is that core speed on the Fury GPU really has no significant  impact on performance whereas memory speed is night and day.  This becomes imperative when you consider that 1179Mhz wasn’t stable in our game tests and lowering it while keeping memory at 1260Mhz showed no real change in our Frirestrike numbers.  (win win) 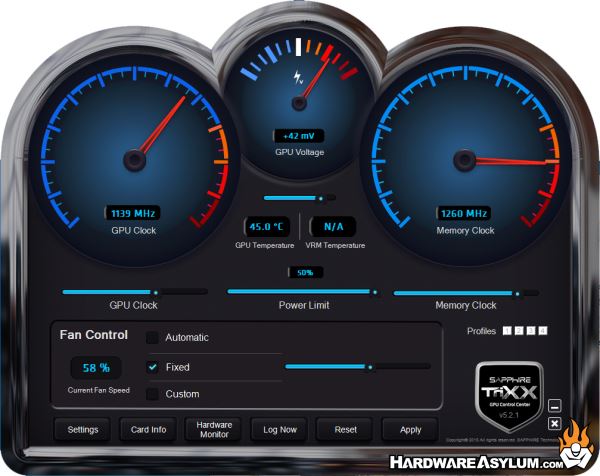 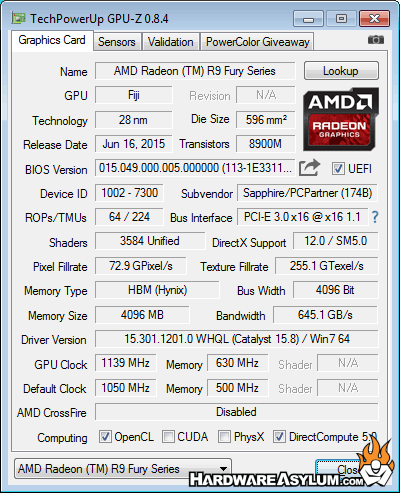 After some tweaking and tuning we settled on an overclock of 1139Mhz Core and 1260Mhz Memory.  To enable this overclock the power target was increased to MAX and only a +42mV voltage bump was required however it ran great at +0mV.  The fan was set at 58% and left to hum away while we tested.

Overclocking is something most enthusiasts like to do and while 89Mhz over the factory overclock may not sound like much there was a notable increase in our synthetic benchmark scores and an average increase of 10fps across the board in our game tests.

The sad part is, 89Mhz doesn’t sound like much, and it really isn’t however, 260Mhz adding to the memory clock is really what gave us those scores.  Bandwidth went from 512GB/s up to 645GB/s and was completely stable throughout our testing session. It will be interesting to see what can be done with this card on a water chiller, which will be a test for another time.