The Classified K is following the EVGA Black on Black color theme with a matte black PCB and oversized heatsinks on both the VRM and Chipset.  You will find a large heatpipe connection between the primary VRM and Southbridge heatsinks to help equalize temperatures. 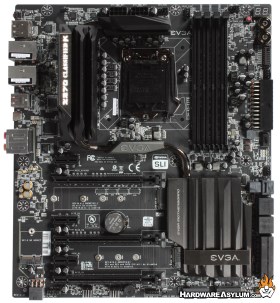 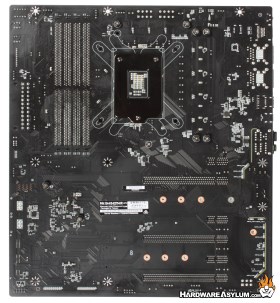 Flipping the motherboard can tell us a lot about how it is constructed including where some of the major chips are located.  Every PCI Express slot is fully wired meaning that the full slot width is soldered to the PCB.  That doesn't always mean each slot comes with full set of PCI Express lanes so we will have to look into that further.

EVGA has included a 13 phase VRM to control the processor, memory, internal graphics and PCI Express.  In terms of overall size of the VRM is average and adequate for an LGA 1151 even with a healthy overclock.

The area around the CPU socket is very well organized with very few components making it good for those who use alternative cooling methods like Water, Phase and LN2. 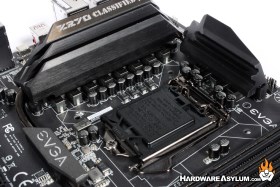 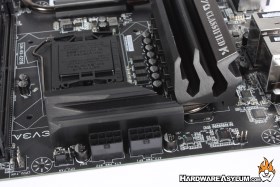 Behind the VRM cooler you'll find the CPU Power connections made up of a two 8-pin connectors.  Given that many Kaby Lake processors have been known to run 6.5Ghz and higher (on LN2) having an extra power connection can ensure the CPU is getting enough power at all times.

The tab is facing outwards so the cables are easily accessible and routed out of the way.