The EVGA Z490 FTW is following a familiar color scheme of black on black with a very large I/O cover design.  The metal I/O cover is a contrasting silver and only occupies a small portion of the I/O.  On previous designs the cover would encompass some of the surrounding VRM heatsinks however with the power demands of Comet Lake they needed to be enlarged. 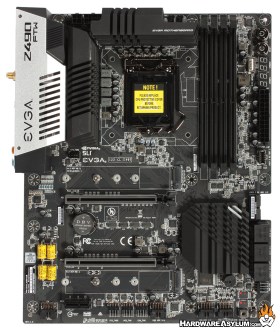 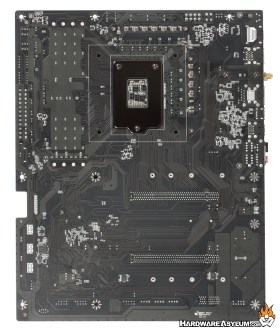 Flipping the motherboard can tell us a lot about how it is constructed including where some of the major chips are located.  As with most EVGA motherboards every PCI Express slot is fully wired meaning that the full slot width is soldered to the PCB.  That doesn't always mean each slot comes with full set of PCI Express bandwidth.

EVGA has included a very interesting VRM that looks to be 11 phases (14 according to the EVGA documentation).  While the number of MOSFETS might be 14 we don’t get this from counting the inductors.  In terms of overall size of the VRM is on the smaller side for an LGA 1200 motherboard, at least when you compare it to some of the other gaming and OC ready boards on the market. 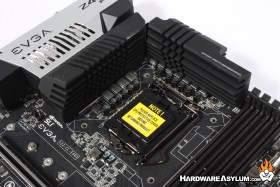 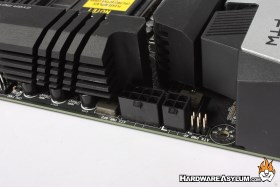 The area around the CPU socket is clean and very well organized with very few components making it perfect for those who experiment with alternative cooling methods.  Depending on your cooling choices the smaller VRM might actually work better especially considering what will need to be insulated.

Behind the VRM cooler you'll find the CPU Power connections comprised of a single 8-pin and single 4-pin power connector.  Access to the connector is good with plenty of access to both the socket connection and retention clip. 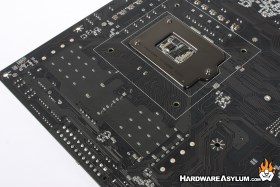 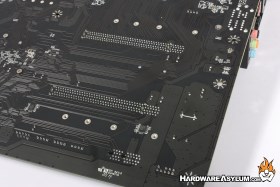 One of the design decisions when it comes to building electronics is deciding how components will be attached to the PCB.  Most are a through design where the solder connection is made on the backside of the PCB while others are surface mounted.  To the end user this rarely makes a difference unless the components are subject to EMI or are in close proximity something that can damage it.

The memory sockets on the EVGA Z490 FTW are surface mounted with a few metal tabs poking through to hold the socket in place.  Overall this should improve memory frequency performance and protects the backside of the memory from accidental shorts.