Dual channel memory comes standard on the Comet Lake processor and the Z490 FTW supports standard speed DDR4 modules up to 4400Mhz with overclocking support beyond that.  A maximum of 128GB is addressable with the proper module density.

Benchtop controls are located in the upper right of the motherboard next the memory slots and near the 24 pin power connector.  These consist of power, reset.  Nearby you'll find a dual purpose debug LED that reads off post codes during boot and later relays CPU temp. 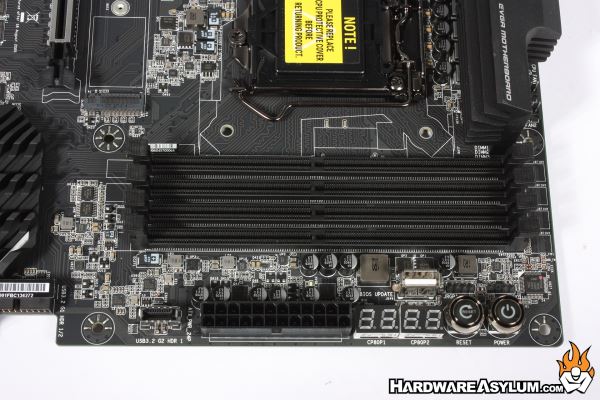 Behind the power buttons are two RGB headers, a single 4-pin for RGB and a 3-pin for Addressable RGB.  EVGA still hasn’t fully bought into RGB on their motherboards and personally I’m not bothered by that.

If you happen to BIOS issues with your motherboard the USB 1.0 port near the power and reset buttons can be used to force flash the Z490 FTW with a fresh image.  This is normally reserved as an overclocking feature so with any luck nobody will ever need to use the USB port on a regular basis.

Internal SATA connections number six and follow the new SATA6 connection standard.  If you happen to want to use RAID you will want to avoid ports 6/7 as they are supplied by the ASMedia controller.  Next to the SATA connectors you’ll find a standard USB 3.0 header mounted 90 degrees with its own cutout on the PCB. 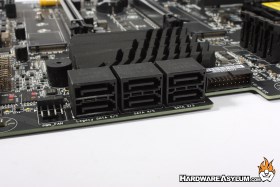 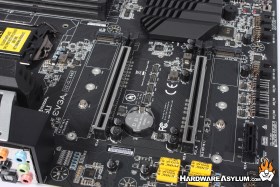 The Z490 chipset comes with 24 PCI Express 3.0 lanes and unlike the lanes coming from the processor the chipset PCIe are intended for connectivity and storage.  You will find a total of three M.2 slots on the motherboard all with different key types for different devices.  If you are confused as to where the third slot is, you are not alone.  The M.2 Key E is a 32mm x1 slot and appears to be used for the Intel Wifi module.  (So, basically unusable without modification) 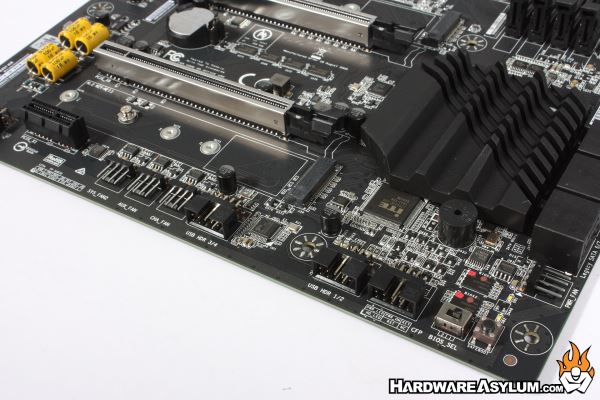 At the bottom of the motherboard you’ll find a number of fan and USB headers.  There are a total of seven 4-pin fan headers on this motherboard with a bold red warning in the manual indicating they are limited to 2 Amp @ 12v (24 Watts) so you’ll want to be careful about chaining fans together.

Oh and the front panel connectors are now at 90-degrees and pointing down.  Make sure your basement panel has a hole nearby.