Overclocking any video card can be a frustrating process balancing between big numbers you want to reach vs boost technologies that hide the fact that the overclock you just hit is one the card does out of the box.

The ZOTAC RTX 2080 AMP Extreme features an amazing build with a 20 phase VRM, massive GPU cooler, dual power sockets and one of the highest boost clocks on the market.  On the surface the GPU looks like it should accept additional clocks extremely well.  During my overclocking tests I was watching GPUz and noticed the card never hit the power target which means that if you can keep the card cool it should overclock quite well.

And it does, right out of the box!.

During my overclocking adventure I was able to get the Zotac RTX 2080 AMP! Extreme to run stable at a solid 1595Mhz Core and 2000Mhz memory.  This is a 60Mhz gain on the core and 200Mhz more on the memory.  To be honest I was expecting more and that is when I started looking at the boost clocks. 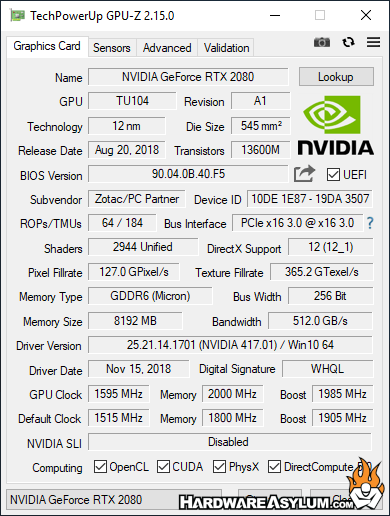 Look at the Zotac Firestorm screenshots below.  The first is default out of the box clocks while running Firestrike Extreme.  We hit a boost of 2025Mhz.

The second screenshot is after my 60Mhz bump in core clock which resulted in a 2100Mhz boost clock.  And. Sadly anything more would cause the card to crash.

To attain this overclock I install the Zotac Firestorm application and started messing with the controls.  100Mhz was a failure so I started backing the clock down until it passed Firestrike Extreme.  From there I started testing my other benchmarks and adjusting the clocks down until they all passed.  This is how I set on 80Mhz in Firestorm which resulted in 60Mhz in GPUz.

So, an overclocking pro tip is to focus on memory overclocking.  Memory speed is the fastest way to get more speed in DX12 benchmarks which also translates into more frames in DX12 games.  Also keep in mind that memory overclocking is also the least stable and most susceptible to corruption due to heat.

Honestly I’m a little disappointed.  80Mhz overclock is really embarrassing and not something I would normally be proud of.  Although thinking back to the early days of video card clocking if you got 20Mhz on a card that was a HUGE deal.  It wasn’t until later that big clocks ment something and would eventually all of that head room would be rolled into a boost clock.

Speaking of head room, the boost clock on the ZOTAC RTX 2080 AMP Extreme is insane!  It is already advertised at 1905Mhz out of the box with a realistic boost of over 2000Mhz.  Simply keep the card cool and you get some amazing performance without having to touch anything.

I did manually set the fan speeds to ensure that the card would stay cool.  As I was running benchmarks I started to notice a number of heat related crashes during the overclocking sessions.  It would seem that the fan profiles error on the side of silence over performance which required some manual intervention.