Much of the synergy between the Isku and the Kone[+] is from the cross functionality provided by the ROCCAT Talk driver.  I mentioned before that I immediately download the latest drivers via the web every time I install new hardware.  A habit I am sure most of us share.  Oddly the TALK driver is not include in the individual drivers and requires a separate download.  I appreciate the fact that not all ROCCAT owners will have two Talk enabled devices but it would be easy to miss this extra step during setup.

Install was simple and opened up the functions in each driver.  Once Talk is installed, both of the individual driver icons are removed in favor of a single control icon that includes both drivers in the menu.

Selecting the devices from this menu gives you the option to open configuration or to exit the driver. 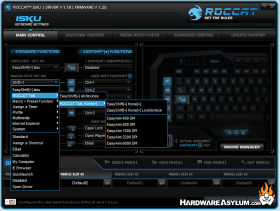 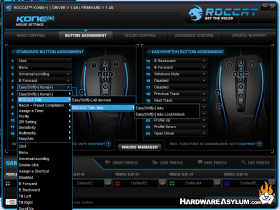 These screen shots show some of the added functionality provided by the Talk driver interface.  On the Isku you can access the Easy-Shift[+] for both devices or for the Kone[+] directly.  It also offers the ability to change the DPI from the keyboard complete with sound feedback.

From the Kone[+] driver you can trigger the Easy-Shift[+] for Isku or for both devices.  In both locations you can also lock Easy-Shift[+] on.  This could be handy for the more tactical parts of games or when stationary and macroing for games like WoW.
Input Device