There are two reasons to buy an EVGA Classified video card and arguably the most important of them is overclocking.  This also might be one of the most confusing things to understand when it comes to the KP Edition Card.  Out of the box the KP Card is noticeably faster than any video card we have tested to date and this is due in part to the monster overclock programmed from the factory.  Combine that with a healthy boost clock enhanced by Boost 2.0 technology and the KP card will run close to 1200Mhz without doing anything.

This is where things get tricky.

As we have mentioned the GTX 780 Ti Classified KP Edition is almost identical to the EVGA GTX 780 Ti Classified.  The PCB layout is similar, the cooler is similar and some of the external features are the same.  The differences are subtitle and designed to enhance overclocking but only if you can keep the card cool.  “Cool” being the operative word. 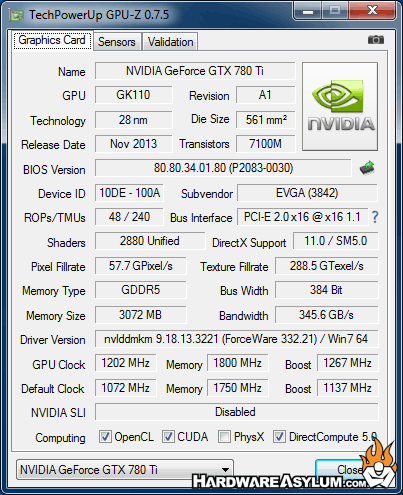 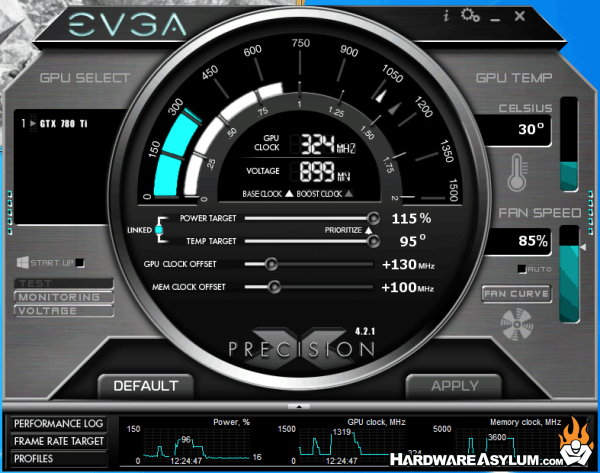 After extensive testing and numerous failed attempts we settled on a rather tame overclock of 1320Mhz Core and 1800Mhz Memory (+130 / +100 respectively).  To enable this overclock the power target was raised to 115% (using the secondary BIOS) along with setting one of the voltage switches giving the card and extra +25mV on top of the dynamic voltage provided by Boost 2.0

There is a modded BIOS floating around that is configured for LN2 overclocking and while we did try it we found it to be incompatible with our air testing methods and frankly was rather junky in comparison to the stock LN2 BIOS.

This is where we would normally tell you that this is the best video card we have ever used and point to numbers to reinforce this belief but in the big picture 1300Mhz Core / 1800Mhz Memory isn’t all that great.  This is especially true when you consider that the regular Ti Classified we reviewed would approach 1350Mhz Core and hit 1950Mhz Memory with hardly any effort.

So, why did the KP Card give us so much trouble??

The reason is twofold.  First this card is using high speed Samsung memory with tighter timings.  Clock for clock the chips are faster than the Hynix used on the regular Classified and much like desktop memory the tighter timings limit overall frequency.  The second is heat, our KP card would complete 3DMark 11 @ 1372Mhz Core but would immediately fail when running Firestrike.  At first we figured this was a voltage issue but after watching the logs we found that when the core hit 65c artifacts would appear and eventually crash the driver.  If we kept the card below 65c everything was fine.

In the end our research tell us that the memory has been tuned to provide the best performance at 1750Mhz and is basically maxed out at that frequency.  The core has also been tuned to run at the selected frequency and doesn’t like getting warm.  Of course the solution for both situations is to run everything colder which will happen in due time.