Water temp and ambient thermal monitoring inline from the outlet of the monoblock, K-Type probe inside the reservoir and at the intake of the radiator

The CPUID System Monitor was used to obtain and record system temperature data and being that this is a multi core processor we need something that will work across all of the cores at once.  For this task we're using a new version of Prime95 (p95v255a) that will allow you to spawn (n) instances to test with. 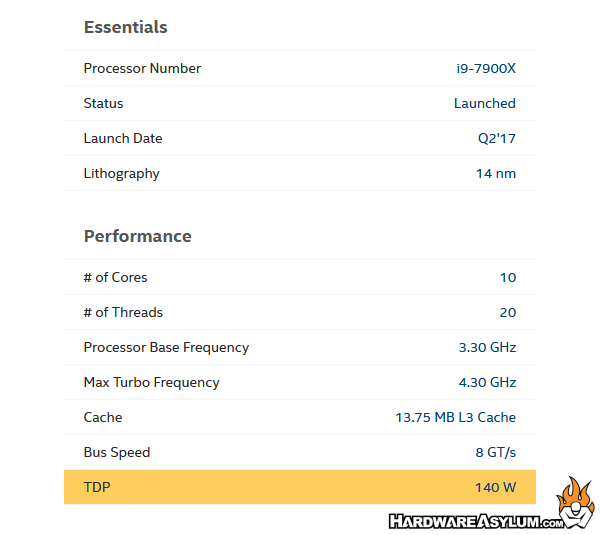 Editors note: Even though the Windows 10 task manager reported 100% processor usage we could never attain a 100% of the rated heat output as documented by Intel (see below) when using Prime95 as a basis for that heat production. Knowing this we ran the stress test until the maximum temperature was attainted and stabilized.

Given that Core i9 7900X processor is not soldered (or delidded) the CPU temp will register higher than they should be.  This is due to thermal transfers between the CPU Die and the Heatspreader though a very robust and not very efficient TIM applied at the factory.  However, given that this and may other factors in this cooling loop are standards they can be used for comparison.

For this next test the CPU speed was cranked up to 4.5Ghz and the test was re-run 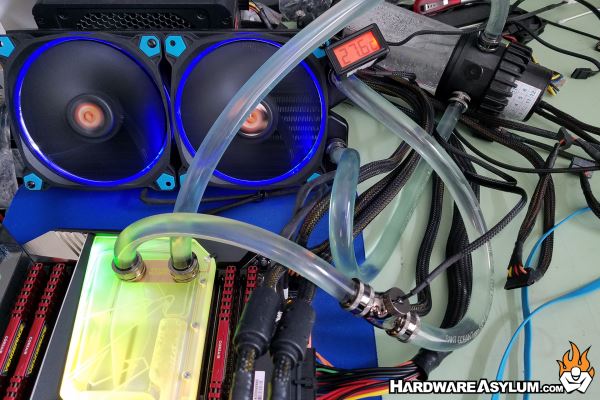 It is not uncommon to see an increase in thermal capacity when using watercooling and is due to how much heat water can move from one location to another.  This is indicated by the C/W number being lower between the tests and there are two ways to look at this.  The first, and most obvious, is that you have to look at things such as fan speed and ambient temperature.

There are two ambient temperatures to factor in.
- Air Temp measures the ambient of air so the end result factors in the radiator.
- Water Temp is the real ambient for waterblock testing and uses the temperature of the water.

In both instances the Aorus Monoblock performed wonderfully and we would expect slightly better C/W numbers when using a 10000 series soldered processor.

The interesting thing to make note of is how consistent the temps are between default and OC.  There is an obvious gain indicating that the 7900X and this waterblock are reaching their thermal limit however given that the numbers are four points of each other would tell me that the design is efficient while the CPU could use a little liquid metal.